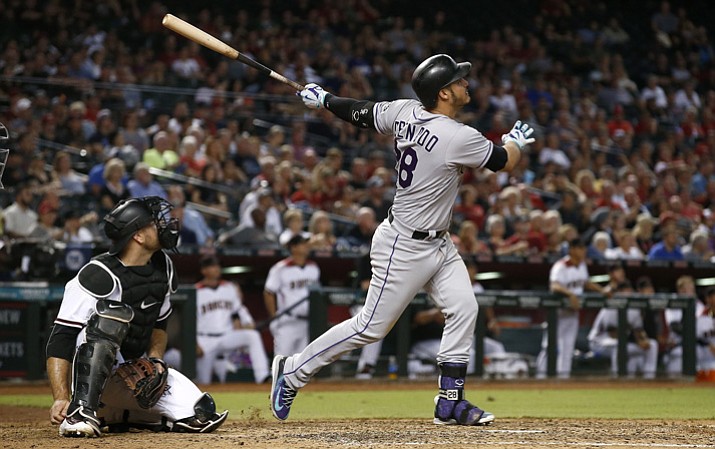 Don’t look now, but the Rockies are on a winning streak and with a series opening win against the Dbacks, they have now won five straight. While it took some timely hitting and their was an unfortunate pitching removal in the game, the Rockies still scored five runs to the Dbacks four to steal a win.

The Dbacks scored first during Monday’s game with Zack Greinke hitting an infield single on a ball deflected by Kyle Freeland. Had he just let the ball go, the Rockies probably would’ve recorded the out without a run scoring, but they did manage to record an out on the play, it just came when Brandon Drury tried to score a second run on the play. With the Rockies recording the out, they shut the inning down without any further damage.

The Rockies countered with a run in the following inning when Jonathan Lucroy led off with a triple. Kyle Freeland and Charlie Blackmon failed to score him so it took a two out hit, but DJ LeMahieu laced a single to right to score Lucroy and tie the game up. The tie would not last long as Kyle Freeland would allow a leadoff single and exit the game when JD Martinez’s ball hit him in the left shoulder and then glanced off his face. The ball was hit at 115 MPH and the Rockies are fortunate that Freeland was only diagnosed with a shoulder contusion.

Tyler Anderson, fresh off the DL, would take over for Freeland and he was terrific. He allowed Martinez to score on a sac fly, but because Freeland allowed the hit, Anderson was not credited with the run. After that, he would allow only one hit, a two out single, over the next three innings. Anderson’s return saved the Rockies big bullpen arms a lot of work and he kept the game in hand where it could’ve gotten ugly.

The next four runs for the Rockies would all come from a very likely source, Nolan Arenado. He tied the game up at 2-2 with a two out double in the sixth before getting the big hit in the eighth. With two outs and two men on, the Dbacks seemingly opted to face Nolan after pitching around Cargo. On a 2-1 count, Nolan crushed a ball to left center that got out for his 33rd homer of the year and three very important runs.

The Rockies pen would allow two runs in the eighth to make it a one run game and they then allowed some base runners in the ninth for what was a high stress finish. Greg Holland worked the ninth, but with one out, an error and walk allowed two men on and then they advanced on a wild pitch with two outs. He fortunately got a ground out to short to finish the game, but it was a high stress finish that the Rockies are fortunate to have finished on top.