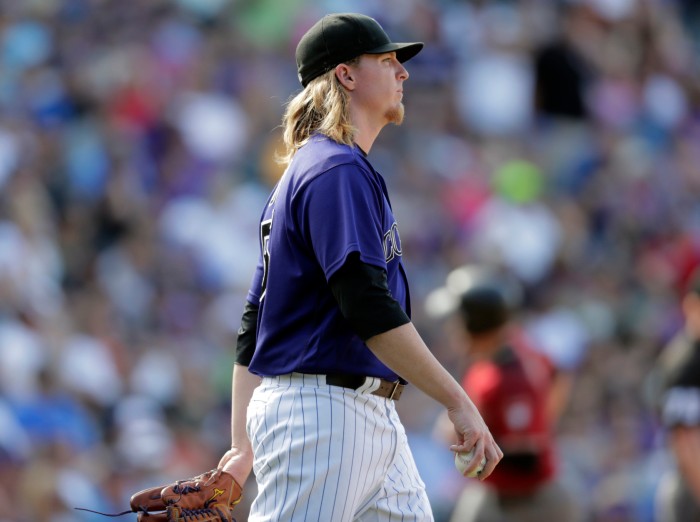 Just as the previous two games in this series, the Rockies got down early. They did manage to tie the game up right after they got down by a run and even took a lead for a few innings, but a late rally by the Diamondbacks set them behind by too big a deficit.

Jon Gray gave up a run in the first, but after that he was really good. He wasn’t striking out batters at his typical rate, but up until the seventh inning he was terrific. Once he got to the seventh though, he ran into a lot of trouble and quickly. Gray got Paul Goldschmidt to ground out but then the next three batters singled and one run scored to tie the game up at 2-2. Then the big hit came for the Diamondbacks with Socrates Brito at the plate. With two on and one out, Brito launched a ball to deep right that got out for a three run homer. Gray would finish the inning, but the four runs he gave up doomed him and the Rockies.

The next inning the Dbacks would score two more runs off of Carlos Estevez who has continued his streaky 2016 rookie year. Estevez obviously has a lot of potential, but until he can command his pitches consistently he will run into trouble. The two runs he gave up and the one run Justin Miller gave up in the ninth turned out to be a big deal.

In the bottom of the ninth and down by five, the Rockies started to rally to make the game a little more exciting. The inning started with a double by Adames and Hundley singled him in for the first run of the inning. Then with one out, rookies Tom Murphy and Raimel Tapia singled to load the bases. Hundley scored on a wild pitch and the Rockies had two chances to keep the rally going or even tie the game. Unfortunately, LeMahieu and Cargo both struck out and the game ended without any further threat.

The loss continued the trend of losing to bad teams for the Rockies. That may mean a good series coming up against the Giants. With the Giants leading the wild card, the Rockies could win a couple games and, at the very least, play the spoiler for the division rival. The Rockies are still in the wild card race, but until they start beating the bad teams they don’t stand a chance.