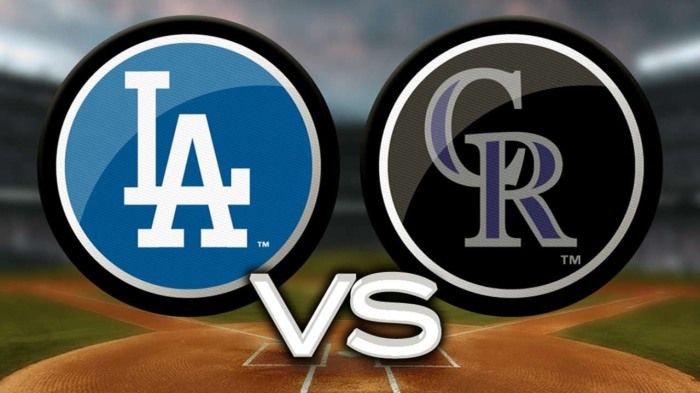 Two rookie pitchers will face off for the series opener on Monday. Maeda has made three starts against the Rockies this year and all of them have been enough to give the Dodgers a win. Maeda is hardly a rookie with the experience he has in other leagues and he has shown that this year with how well he has pitched. Jon Gray is still very much a rookie and despite the starts he made last year, he is still growing. Gray has pitched really well this year and actually set the Rockies rookie record for strike outs in a season. He will look increase that record on Monday against the Dodgers for his third start. In each start against the Dodgers, Gray has improved upon his last outing against them. He will hope to continue that trend on Monday and with how the Rockies have done against teams ahead of them, there is a good chance he will have a successful outing.

Hill has only made one start for the Dodgers, but with the Athletics he was terrific. Coming to Coors Field is no easy task as many pitchers have found out this year, but with how Hill has been pitching this year he is likely full of confidence. That may make for a tough matchup, but the Rockies have an explosive offense, especially at home, and can erupt for a lot of runs on any given day. They also send Tyler Anderson to the mound who has been the most consistent pitcher this year for the Rockies. He is also only a rookie and holds the lowest rookie ERA for a Rockies pitcher. Anderson is part of the best Rockies rotation in quite some time and is definitely an important piece for the future of this team.

This series is a looking glass into the future for this Rockies rotation. The third game of the series sees the Rockies sending a third rookie pitcher to the mound. Hoffman was better in his last start out and he will try and improve upon that once again against the Dodgers. He certainly has potential as he should for someone who was traded for Troy Tulowitzki, and he, just as Anderson and Gray, is a huge part of this Rockies future. Pending some miracle 2007-esque run, the Rockies will not make the playoffs this year, but there is still a lot of reason to watch the Rockies. With the young pitchers and position players that will get a chance to show their chops in the big leagues, this team will have a wild month of September and may show what the future holds.