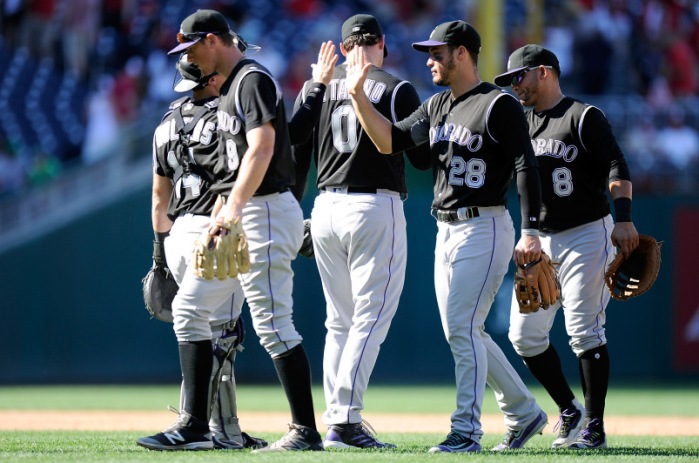 The Rockies managed to win the series against the Nationals after getting swept by the Brewers. It continued the extremely confusing trend of winning against the best teams in the league while struggling against the bottom dwellers. On Sunday, it was Nolan Arenado carrying the team with Chad Bettis having a great game. The Rockies won in the end by a score of 5-3 despite three solo home runs from the Nats.

The offense started early for the Rockies and further enforced the 1-2 punch combo of Charlie Blackmon and DJ LeMahieu at the top of the lineup. Charlie singled and then DJ walked to put two men on. Cargo couldn’t do anything productive in his first at bat, but a red hot Nolan Arenado had his first hit of what would be a four hit day. On a single to left, Charlie scored the first run of the game.

Chad Bettis ran into some early trouble when Trea Turner hit a solo homer on a 2-1 count. Even though the start to the game was not what Bettis would have wanted, it did not seem to phase him. The only other run that came off of Bettis was a home run in the seventh from Wilson Ramos. Other than the two solo homers, Bettis allowed some scattered singles and only walked one batter in the game. He struck out six over seven innings and had what was probably his best game all year long.

The Rockies offense didn’t do much for Bettis, but luckily all he needed was Nolan Arenado. After Arenado’s single in the first, he lined a two run homer in the third to put the Rockies up 3-1 at the time. David Dahl followed that up with an opposite field shot to give the Rockies what would eventually be the winning run.

Each team would score one more run in the game. The Rockies got another run on a strange play. With Daniel Descalso on second after doubling, pitcher Koda Glover fired a pitch that Ramos completely missed. The ball hit the home plate umpires left shoulder and shot into the air. Ramos briefly checked on the ump before realizing that Descalso had not stopped running from second. Descalso ended up scoring to give the Rockies their fifth run.

Bryce Harper hit a solo shot in the ninth, but it did not matter as Adam Ottavino came on and shut the game down. He struck out two and finished with a fly out off the bat of Ryan Zimmerman. Overall, it was a well played game by the Rockies from top to bottom and it gives them some hopeful momentum going into a series with the Dodgers. They are still six games under .500 and 6.5 back in the wild card, but this season has been much better than the previous two. Going into the final month of the season, the Rockies will have what should be considered September spring training and see what their team will be next year.