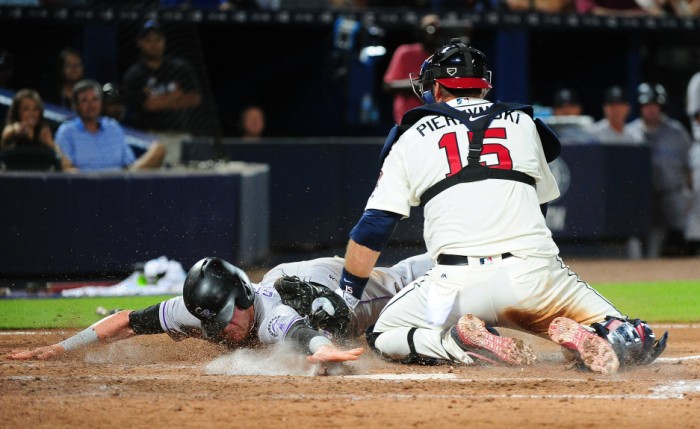 When the Rockies trailed in the seventh inning, like they were on Saturday, they had lost all 43 games. No comeback wins like that has really been the boon of the Rockies season. While it is never really expected to come back against teams that late in the game, there are normally a few games over the year where teams rally for a late inning win. The Rockies did just that on Saturday with a little help from the Braves. The final score was 4-3 with all four of the Rockies runs coming in the last two innings.

Chad Bettis was facing off against Mike Foltynewicz. Through seven innings, Folty was out pitching Bettis despite Chad’s best efforts. A second inning home run from A.J. Pierzynski put the Braves up 2-0 and another run would cross in the seventh. Bettis finished 6.2 innings before being pulled with two men on. It was still a solid start from Bettis, Folty was just better.

With the Braves, no game has been safe no matter how late it has been and just as they did on Friday, the Braves defense and pitchers gave the Rockies a chance. After getting nothing going through most of the game, the Rockies finally got some offense going in the eighth. Three straight batters reached with two singles sandwiching a walk. The final single drove in the first Rockies run with Nick Hundley hitting a soft line drive to left. That is when the Braves started to collapse. After advancing on a fly ball, Mark Reynolds was able to score on a wild pitch, the Braves sixth in two games (not including the two that would come in the ninth).

The Rockies were down by a run and DJ LeMahieu came up with a runner on and two out. On a hard ground ball to second, Gordon Beckham made a good play to keep the ball in the infield, but when he tried to make the throw to first, he fired low and the ball skipped by Freddie Freeman. Nick Hundley scored and the Rockies had tied the game. The Braves had collapsed in the eighth and it would only get better for the Rockies.

In the ninth inning, Trevor Story took an adventure around the base paths that would give the Rockies the game winning run. After singling on a line drive to right, Story advanced two bases on two separate wild pitches. Then with one out, Mark Reynolds hit a ground ball to short stop. Erick Aybar charged and fired home, but the throw skipped by the cather and Story scored. It capped another bad night for the Braves and gave the Rockies a gift of a win.

Carlos Estevez closed out the game without much of a threat and the Rockies won their second straight. They will try and sweep the Braves on Sunday with Jon Gray on the mound. If the Braves continue their minor league play, the Rockies should win easily and head home with some second half momentum.