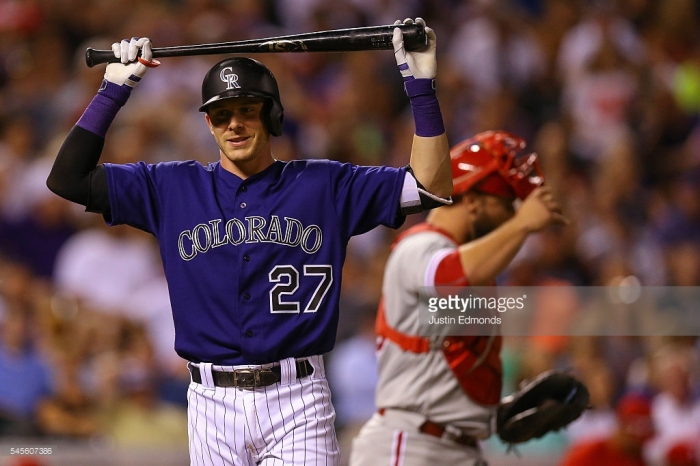 Jon Gray has shown he absolutely has what it takes to be a major league starter. While the Phillies might not have the most threatening lineup, they are still a major league team with professional hitters. Gray took note of that and shut them down. However, the Rockies bullpen collapsed on him and turned Gray’s terrific outing into only a good outing. The Rockies ended up losing 5-3 against Philadelphia as the series evened up at 1-1.

The Rockies did jump out to a lead pretty early in the game scoring a run in the third inning. With two on and two out, Cargo laced a double that drove in Charlie Blackmon to put the Rockies up a run. Another run would cross in the fifth on a Trevor Story double and the Rockies would go up 2-0 while Jon Gray dominated.

Gray cruised through the first six innings where he completely blanked the Phillies. He ran into trouble in the seventh however and that is where the game fell apart. A walk and a single sandwiched a strike out and runners were on first and third. Walt Weiss then went to the mound and pulled Gray. Jake McGee then came on to try and keep the Phillies off the board. The first batter he faced, Cesar Hernandez, singled in a run to put the Phillies on the board. The next batter Tommy Joesph put the big hit on the Rockies and McGee as he crushed a three run homer to deep left field. The damage would end there, but the Rockies were down 5-2 and Jon Gray’s great outing was wasted.

The Rockies would score a run on a Trevor Story single in the bottom half of the inning, but it was not enough to spark a rally. The game would end by a score of 5-3 and what seemed like a game that would go the Rockies way turned upside down in the seventh.

With the All-Star break coming up quickly, the Rockies will have a chance to rest and regroup. The second half has not normally been to friendly to the Rockies, but they will start with three series against some of the worst teams this year. If there was ever an opportunity to get back into it and right the ship, that would be the time. Facing the Braves twice and the Rays will give the Rockies some easier (relatively) competition to regain some momentum and confidence. However, if they struggle against those teams, the second half could be an ugly one.