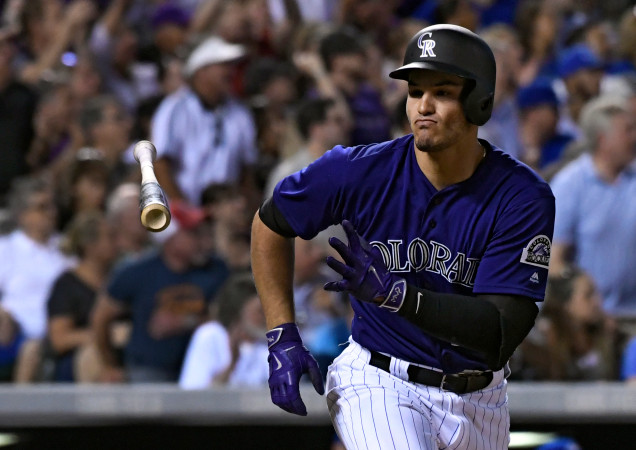 Jon Gray and the Rockies rode a 6 run seventh inning to a 9-5 win for the series opener against the Toronto Blue Jays. Marco Estrada kept the Rockies at bay for the first five innings, but ran into trouble in the sixth when the Rockies final broke through.

Gray and his first inning struggles continued on Monday night when he allowed a solo shot to Devon Travis. From there Jon Gray settled down through the second and fifth innings. He ran into some more trouble in the sixth. After getting two quick outs, the middle of the Blue Jays order attacked for three runs. After Travis doubled, Josh Donaldson singled him in. Then Edwin Encarnacion homered to put the Blue Jays up 4-0.

The Rockies were in desperate need of seizing back some of the momentum and after getting nothing going against Estrada all night, the Rockies finally got to him. A walk and a double by Blackmon and Adames put two one for the heart of the order.  Arenado was unable to do anything as he struck out, but the Cargo came up and put the Rockies back in the game. On a 2-2 count, Estrada through a change up to Cargo that got way too much of the plate. Gonzalez lined a ball to right field that got out of the park for a three run homer and put the Rockies right back in the game.

Jon Gray went out for the seventh in an inning that would eventually give him the win. Gray finished with a pretty good line and despite it not being a quality start, it was still very effective. He finished with 8 strike outs and he didn’t walk a single batter. The Blue Jays did get to him for four runs, but he kept the game in check for the Rockies to comeback.

Th Blue Jays bullpen came on in the seventh and gave the game up. The inning started harmless enough when Brandon Barnes singled and was bunted over by a pinch hitter.  But then it started to fall apart. The next two batters got hit by pitches and the bases were loaded. Arenado came to the plate and although he was hitless up to this point, he was ready to come through. Nolan singled down the left field line and drove in two, putting the Rockies up 5-4. Cargo then singled to load the bases again for Reynolds. A walk scored another run and Descalso came to the plate with the bases still loaded. He singled down the line to score two more run. One more run would cross in the inning and the Rockies would enter the eighth with a 9-4 lead.

Encarnacion would hit another home run in the ninth, but it was too little, too late and the Rockies finished with a win. It was a good win for the Rockies and sets them up for the series win. Eddie Butler takes the mound on Tuesday for the second game of the series and with a good pitching performance, the Rockies can with the series.