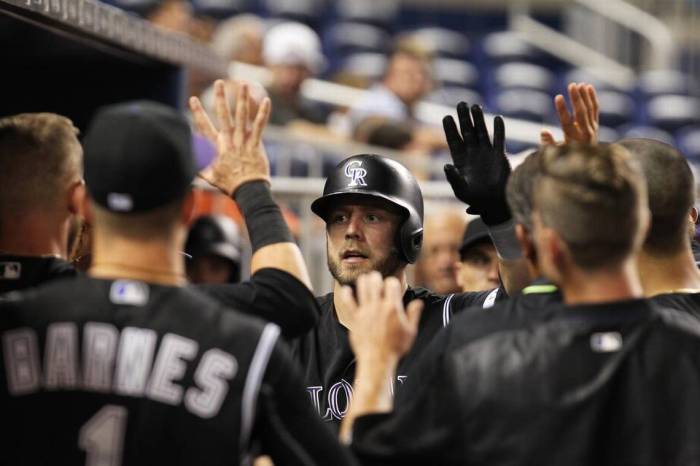 The Rockies hit 5 home runs on Monday night at Marlins stadium, the most by a single team in the history of the park, and the Marlins hit three solo shots of their own, to set an MLB record for the most solo home runs in a game where the only runs scored were by solo shots.

For the Rockies, the 5-3 win salvaged the series and avoided a sweep at the hands of the surging Marlins. The game saw Jorge De La Rosa pitching well and the Rockies offense finally competing for the win. Along with the bullpen doing what they needed, the Rockies finished the four game series with a team win.

The game started for the Rockies looking like they would run into some tough luck. After a single by Nolan, Cargo hit a ground ball that was up the middle and not handled by Prado initially. With no one covering third, Nolan thought about trying to make something happen but hit the brakes and slid out, resulting in an easy out and the end of the inning.

The Marlins then came into the bottom of the inning and hit two solo home runs, back-to-back. Marcell Ozuna and Giancarlo Stanton, who broke out of his season long slump against the Rockies, both hit the home runs. It was an ugly start for De La, but he gathered himself and end up going six pretty good innings. He walked two batters and did allow another home run to Ozuna, but those three solo bombs were the only runs scored.

The Rockies, after allowing the two home runs in the bottom of the first, came back in the top of the second and showed their own power. Trevor Story, after a weird sequence where he looked to strike out on a pitch that hit his shoulder, went deep to left after the play was reviewed. It was found that the ball did hit Story and that it should have been a strikeout, but the play was not challengeable and Story took full advantage of the gift with a home run on the next pitch. Ryan Raburn then grounded out for the first out of the inning, but Mark Reynolds and Nick Hundley followed the out with back-to-back homers.

That put the Rockies ahead 3-2 and gave them their first productive inning, excluding the third inning two nights ago, of the series. The Rockies would hit two more home runs, another by Mark Reynolds and a ninth inning shot by Charlie Blackmon and the game would end 5-3.

The bullpen, excluding Chad Qualls, pitched well through the final three innings, allowing only one hit and one walk. Carlos “Wild Thing” Estevez came on in the ninth and despite allowing a hit, shut the game down with ease. He earned his fourth save of the year and gave the Rockies the win.

Colorado heads out to New York for a short two game series against the Yankees for a rare couple of games in the Bronx. Chad Bettis and Jon Gray pitch in the series and with two wins, the Rockies can finish the road trip 3-3.