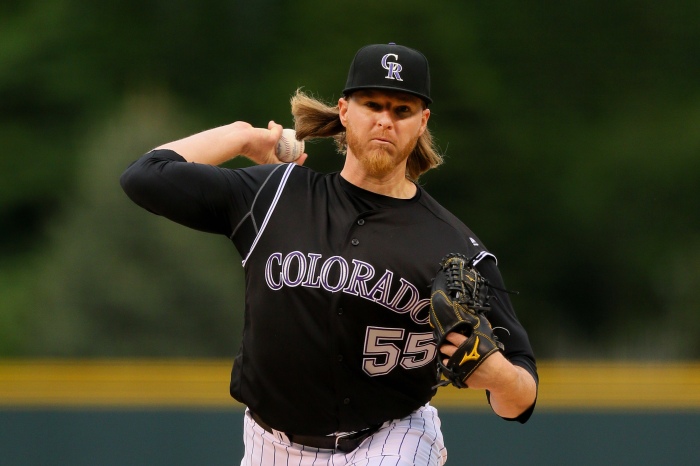 Jonathan Gray has finally earned his first Major League win during his 14th career start. It took longer than the Rockies or Jon Gray would’ve expected, but everything came together for Gray and the offense for what was an important win. The 5-2 win against the Mets snapped an 11 game losing streak dating back to 2013 against the National league New York team.

There was a few different distractions surrounding this game for the Rockies. A more minor one was Daniel Descalso coming off the DL sending Ben Paulsen down. It’s more tough luck for Paulsen who was the player with options, but the Rockies will see him back in not too long. The more major distraction and national news coming on Friday was the suspension of Jose Reyes. Reyes was suspended 51 regular season games and will be eligible to return on June 1st. He will likely still not have a place on the Rockies when that time comes around, but it will be interesting to see what happens.

Regardless of these distractions, the Rockies came out and competed for the win. Gray was not as efficient as he would’ve liked through the first two innings and ran into some trouble in the second when he walked and hit a batter to put two on with two outs. Catcher Kevin Plawecki then came to the plate and on a 2-2 slider, he smacked a ball to the left-center field gap and both runs scored.

With the Matt Harvey of past seasons on the mound this would have spelled trouble, but this years Harvey has not been as effective with reduced velocity and command. The fourth inning saw the Rockies catch a break on some bad defense. Nolan Arenado singled and Gerrardo Parra came to the plate. On a hard line drive to left field, Michael Confort charged in to try and make a catch. He got caught in no-man’s land where he was too far to dive, but not far enough to effectively stop the ball. It skipped by him and Parra was credited with an RBI triple. Mark Reynolds, now the everyday starter at first base, continued to show why the Rockies can rely on him and he drove a single up the middle to tie the game at two.

The next inning saw some more offense from the Rockies and a first for Jon Gray as a batter. Gray started the inning with a single, the first hit of his career and got the Rockies rally started. Charlie Blackmon then laid down a perfect bunt for base hit of his own. Trevor Story continue his rookie of the year campaign and hit his second double of the game, a run scoring hit to put the Rockies ahead 3-2.

The Rockies continued the scoring for a third straight inning with two more runs. A Tony Wolters opposite field ground balls scored DJ LeMahieu who had doubled and Charlie Blackmon followed that a batter later with a double of his own. That put the Rockies ahead 5-2 and gave Gray all the runs he needed to earn a win.

Gray was on his game on Friday night and pitched seven terrific innings. He allowed only five hits and a walk along with the hit batter. Gray managed to tally 8 strikeouts on 105 pitches. The big moment for Gray was going back out in the seventh. In past games he was on a tighter leash and with a pitch count in the 90’s he probably would’ve been pulled. Him going back out and shutting the Mets down for one final inning was a big step of growth and a perfect way to cap his first win.

The bullpen came in the final two innings and locked down the win. Carlos Estevez came in and despite allowing a man to reach, he still kept the Mets off the board. Jake McGee then came in and earned his 10th save. McGee has looked much better his last couple of appearances and that is good news for a team that can’t afford any blown saves.

The win gave the Rockies some momentum for the rest of the series. They take on spot started Logan Verrett on Saturday with Eddie Butler taking the mound opposite him. It is a good chance for Butler to show his real potential as he does not have a great history at Coors but has pitched well in two starts this year, both on the road.