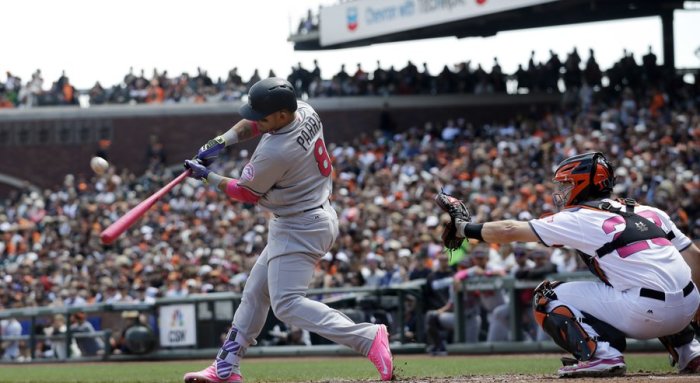 The Colorado Rockies managed only two runs on Sunday afternoon, but it was plenty as the bullpen and Eddie Butler shut the Giants down. The final score was 2-0 and the Rockies finished the series and road trip at 2-2 and 5-5 respectively. The win put the Rockies at 15-16 on the season.

The scoring started early for the Rockies. Trevor Story hit a double with one out in the first and Nolan Arenado got a lucky break on a ball to right-center field. The ball was hit well, but Pence appeared to be in the vicinity to catch it. He couldn’t find the ball however and it hit off the base of the wall. Nolan cruised into third with an RBI triple.

The Giants would threaten in the second inning. With one out, they loaded the bases and the number 8 hitter Mac Williamson came to the plate. Butler was able to bare down and strike him and Jeff Samardzija out. It was two big strikeouts for Butler and kept the Rockies ahead.

The next inning would see the Rockies score the final run of the game. With two out and nobody on, Carlos Gonzalez and Arenado singled back-to-back to put two on for Gerrardo Parra. Parra looped a ball down the left field line that dropped for a hit and gave the Rockies another run.

From there, neither team would score or even threaten to score the rest of the game. The bullpens and starters kept the other team off the bored, and for the Rockies that meant the win. The final line for Butler was 6 innings pitched while walking 2 and striking out 6. It was a really solid game for Butler as he built off his strong start that fell apart in his last outing.

Boone Logan, Carlos Estevez, and Chad Qualls kept the game scoreless and allowed closer Jake McGee to come on for the save. McGee struggled to start the three batters he faced off with a strike, but it didn’t reduce his effectiveness. Brandon Belt was the only batter to reach in the ninth and it was off a flukey check swing that worked as a bunt. McGee then struck out Pence and induced a double play from Brandon Crawford to win the game for his eighth save of the year.

The Rockies will come home tomorrow to face the Diamondbacks. It is a good opportunity to get off to the winning ways at home as they bring some momentum from this win. They will also send out their best pitcher so far, Tyler Chatwood, against the Diamondbacks worst pitcher, Archie Bradley.