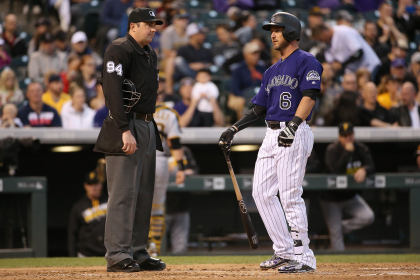 Last night was another strange game, not in the same way as the Sunday game, but its own unique brand of strange. The Pirates ultimately prevailed over the Rockies with a final score of 5-1, but that score does not tell the whole story at all.

The game started innocently enough, neither team scored through the first two innings and with Chad Bettis batting in the bottom of the second with two outs, the rain broke out and sent the game into a delay. It was a delay short enough to allow both pitchers to come back  out and remain in the game. Things started to break down for the Rockies in the fourth.

With the game still at 0-0, Nick Hundley ended the inning with a backwards K. The call by home plate umpire Lance Barrett was his fourth called strike three on the Rockies of the night. While blaming the umpires for a loss is never a good excuse, this was a night where Lance Barrett clearly influenced the game. Hundley argued his way back to the dugout over the called third strike and Walt Weiss went out to defend his player. This resulted in an ejection of Weiss, you can’t argue balls and strikes, everyone knows that. This was a case of Weiss protecting his player along with voicing his displeasure with the zone, that was very much wider than it should’ve been.

The Pirates scored in the next inning to earn the first run of the game and give them the lead. The Rockies couldn’t really out anything together and then the umpire struck again. In the bottom of the sixth with Ryan Raburn batting, Lance Barrett again called a very questionable strike call that resulted in the second out of the inning. This was Raburn’s second caught looking of the game, neither on balls in the strike zone, and he argued the call. He was on his way back to the dugout, presumably chirping a little on the way back, but with his back turned Barrett ejected Raburn. This is a case where the umpire needs to get over his ego and just let the player walk while saying a little. I don’t know what was said between the two, but had Barrett just walked away as well, this would’ve ended harmlessly. Instead Raburn was ejected and bench coach Tom Runnells came out to just get an explanation. In another questionable move by the umpires, the third base ump came down into the argument. Now this was an argument between home plate umpire Lance Barrett and Runnells. It should also be noted that the crew chief of the night had already inserted himself into the situation, as he should have. But what isn’t called for is the third base ump, who wasn’t a part of the initial argument nor the crew chief, coming down and getting into the argument. He just simply doesn’t belong there. The argument went on for a few minutes and somehow Runnells was never ejected. That was basically the end of the game for the Rockies.

The next inning was a complete collapse. Bettis went back on the mound with a pitch count around the 90-mark. It was good to see Bettis go back out there and try to go seven strong, but ultimately Bettis looked as he may have been out of gas. Gregory Polanco started the inning with a single, but then Bettis was able to get the next two batters out. Polanco worked his way to third and then pinch-hitter Jason Rogers walked. With John Jaso batting, Bettis threw a wild pitch that allowed Polanco to score. Jaso ended up walking and that is where Bettis was pulled. Recent call-up Scott Oberg came out and started exactly where he left off. Oberg gave up a three-run shot to Matt Joyce and turned Bettis’ admirable start into an ugly line.

The Rockies would go on to score a run in the 7th, but by then the score was 5-1 and they could not gather any further momentum. It was an ugly loss for the Rockies due to some bad umpiring, but they have to come out on Tuesday and try and take a win from the Pirates. It won’t be easy with Gerrit Cole on the mound, but no win is easy for a major league team.