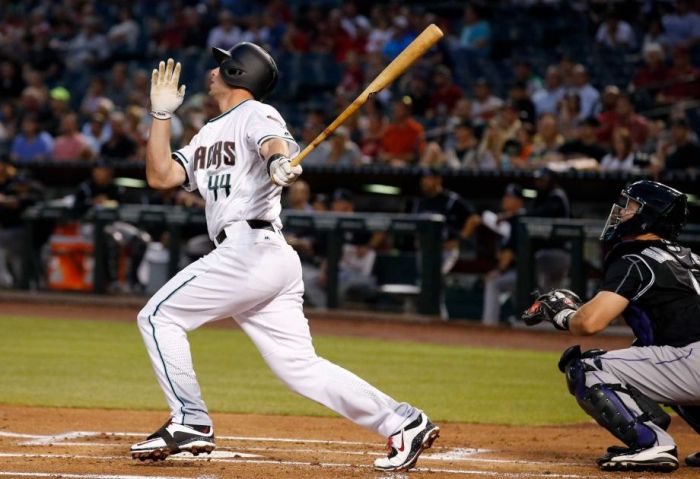 9 runs given up in two innings just isn’t something that wins games, anyone with eyes can see this. Chad Bettis and the bullpen could not hang on to a four run lead for the Rockies and because of that, the Rockies suffered their first loss of a season in typical Rockies fashion.

Paul Goldschmidt showed why he was second in MVP voting as he drove in 4, one on solo home run, and then he hit a three-run triple in the seventh inning that really crushed the Rockies for the rest of the game. The final score was very similar to Monday night, with the teams switching sides. Arizona won 11-6.

I’m a believer in sample sizes however, and one game is certainly not indicative of what can happen over a 162 game season. If we took one game to judge teams, Zack Greinke would be the worst pitcher in baseball, the San Diego Padres would go the whole season without scoring, and games would end because of the new slide rule every night.

A bad night for the Rockies bullpen makes a lot of fans say “Oh, not this again,” but much like hitters, pitchers need to develop a rhythm to get in the groove of things. The bullpen will not be this bad every night, nor will the Rockies pitchers go less than five innings every night. If they do, this will be a long, painful season.

The pitching is always the story for the Rockies, and that is because their offense often performs like they did last night. Trevor Story became the first hitter since 1889 to hit a home run after a two homer game on his Major League debut. DJ LeMahieu also hit a homer as did Nick Hundley. The power is scattered throughout this lineup and it will be dangerous throughout the year, but it won’t mean much without pitching.

The defense is solid and flat out great at some positions (looking at you Nolan), the offense is dangerous 1-8, but as always, the question is pitching. De La Rosa is a notoriously slow starter, Chad Bettis is still young and one shaky start at the start of the season is nothing to be concerned about, and only two bullpen pitchers pitched last night, neither of whom are expected to be big difference makers over the course of the season. Like I said earlier, sample size. Two games into the season you can’t say this team will make the playoffs, but you also can’t say they are doomed to the cellar. Of course it helps to get off to a good start, but a lot can happen and as players get healthier, the pitching staff of this team should only get better.

The rubber game of this three game set will be played at 1:40 and Tyler Chatwood will toe the rubber for the Rockies against southpaw Patrick Corbin. Chatwood who hasn’t pitched since early 2014, will look to start hot. Chatwood is one of the current pitchers for the Rockies who has the highest upside. A strong performance today is really needed to give the bullpen a more conventional game where they don’t have to pickup 4+ innings.